We thought this month would be fun to highlight one of our employees’ favorite guns and give a write up on the parts and purpose! This one is from our marketing team, and it is the Browning Buckmark. For the uninitiated, the Buckmark is a 22LR rimfire pistol, although at one point Browning offered it in rifle. It operates via a straight blowback design and features a thumb safety. Barrel lengths over the 30+ years of production vary as well as finish, sights, and grips.

This Buckmark features a Tactical Solutions threaded barrel for use with a suppressor. The pictured suppressor set up is an older Gemtech Outback IID with their quick detach adapter allowing the can to be quickly mounted or removed as needed. Drilled and tapped into the six o’clock position of the barrel is a small picatinny rail segment with a Surefire X300 affixed. The grips are from Hogue Inc. and are made from G-10. The give a significant improvement in grip due to the aggressive texturing. You can also see some skateboard tape on the from strap. Lastly, crowing the pistol is the Outer Impact Modular Red Dot Adapter (M.R.A.) with the Vortex Venom. The Buckmark came from the factory with the handsome gold trigger for an extra bit of bling.

Here is what our team member had to say about this pistol. “This is easily one of my most favorite guns. I bring it with me anytime I am in the outdoors. I initially purchased this in 2010 to shoot steel challenge and after several thousand rounds I opted for the lighter TacSol barrel, and I had just bought my first suppressor, so I needed the threads. The grips were added as I was shooting in damp environments along the river or during winter when it was snowing, and I didn’t want it to slip out of my hands. The red dot was an easy choice, besides working for OuterImpact, I found that it made me faster and more accurate when shooting at small fast-moving targets, like ground squirrels. As it gets darker out with wintertime having the Surefire didn’t seem like such a bad idea, plus I am afraid of the dark. Overall, this pistol is fantastic and the upgrades I have made all serve a purpose.” 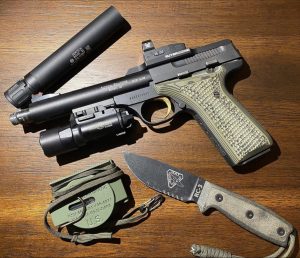 What are you looking for?

NAVIGATION
Join Waitlist We will inform you when the product arrives in stock. Please leave your valid email address below.